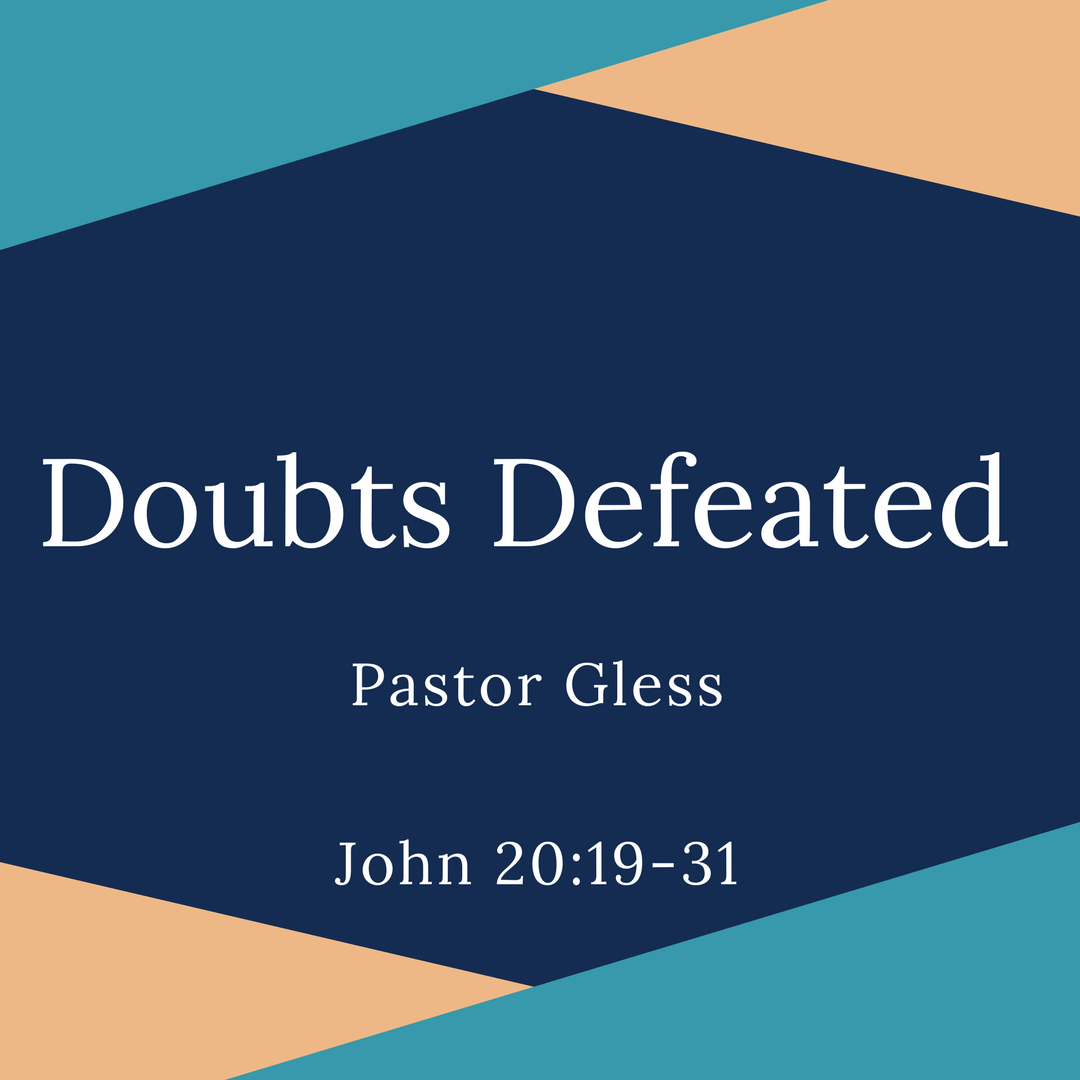 Grace, mercy, and peace be to you from God our Father and our Lord and Savior Jesus Christ. Amen.

Doubt. Do you ever doubt? It is a word that is associated with uncertainty. If left untamed, it becomes disbelief. And where disbelief dares to enter in, fear is not far to follow.

Doubt. It is a word that is often associated with the disciple Thomas. Doubting Thomas. But, if all the disciples could have been thoroughly examined for doubt that Easter night, they would have all ‘no doubt’ tested positive. For they too were filled with uncertainty, disbelief, and fear.

Our text tells us that On the evening of that day, the first day of the week [Easter day], the doors were locked where the disciples were for fear of the Jews. But no doubt such fears ran deeper than that. Instead of following their leader, they had abandoned Jesus. In the Garden of Gethsemane, when Judas came with his band of thugs, when Jesus seemed to have needed them most, they had abandoned Him. They had run off into the night leaving Him for dead at the hands of Pharisees. They had failed in their following.

By this time on Easter evening, the word was out there that Jesus had been raised from the dead. Mary had reported to the disciples that she had seen the Lord. It was just as He had predicted. After three days He would rise. They should have listened. They should have followed. They should have done something. But they didn’t. They hadn’t done anything. Oh how their minds must have been a swirling mess of doubt-filled thoughts wondering what would happen if Jesus came and appeared to them. Surely He would scold them, despise them, condemn them.

You see what happens when doubts abound. Doubts disorder truth from reality. It separates the two. Doubts lead to fear and uncertainty because the mind forgets the truth and starts to chase after lies. Doubts are quite damning because they convince the doubter that there is no hope, only condemnation.

How surprised they must have been when Jesus did appear and speak to them. On the evening of that day, the first day of the week, the doors being locked where the disciples were for fear of the Jews, Jesus came and stood among them and said to them, “Peace be with you.” When he had said this, he showed them his hands and his side. The disciples were glad when they saw the Lord. Jesus said to them again, “Peace be with you. As the Father has sent me, even so I am sending you.” And when he had said this, he breathed on them and said to them, “Receive the Holy Spirit. If you forgive the sins of any, they are forgiven them; if you withhold forgiveness from any, it is withheld” (John 20:19-23).

Wait just a minute! This was not the scolding they expected. There was no tone of disappointment or condemnation. In no way did it seem that He despised them for their lack of faithfulness. Quite the contrary. This was Jesus being true to His character as One who loves and forgives in a way that goes against all common sense. This is that scandalous love that defies all human reason. This is that peace that passes all human understanding and He was literally delivering it to them with His very own breath as He said not once, but twice: “Peace be with you.”

What’s more, instead of letting them have it for their doubts and fears, He was gifting them with the Holy Spirit and sending them out for service. It is what we call the Office of the Keys: “that special authority which Christ has given to His church on earth to forgive the sins of repentant sinners, but to withhold forgiveness from the unrepentant as long as they do not repent.” He was giving them the very keys of the doors of heaven so that they might serve others in the stead and by the command of their Lord Jesus Christ.

Though they were glad to see Jesus, just imagine how confused they must have been. To think that they expected punishment, and in place of punishment they got peace.

Something He didn’t hesitate to deliver to doubting Thomas either. Though the disciples delivered to Thomas the same testimony that Mary had given, that they had seen the Lord, he would not believe it. He needed proof. He demanded proof. And that’s exactly what Jesus gave him as he sought His doubting disciple out.

Eight days later, his disciples were inside again, and Thomas was with them. Although the doors were locked, Jesus came and stood among them and said, “Peace be with you.” Then he said to Thomas, “Put your finger here, and see my hands, and put out your hand, and place it in my side. Do not disbelieve, but believe.” Thomas answered him, “My Lord and my God!” Jesus said to him, “Have you believed because you have seen me? Blessed are those who have not seen and yet have believed” (John 20:26-29).

The proof Thomas demands, Jesus gives. He gives Him proof with peace. It was more than he could have ever asked for, and certainly more than he deserved. Such is the way of our gracious God.

What Jesus did for Thomas and all of the disciples, so He does for us, because He knows that we have all sorts of doubts too. We doubt His love for us. Does God really love me for all that I have done? We doubt whether we are truly forgiven. Will God actually forgive all my sins, even the really bad ones? We doubt whether or not we will be saved. Will God actually welcome me into His heavenly home? We have all sorts of doubts when it comes to our relationship with God.

But God defies all common sense and human reason, and He comes right into our lives and into our ears by way of His Word. He does not hesitate to seek us out, to defeat our doubt. And He does more than just walk through a wall, He walks right into our hearts to save us.

His pierced hands that He showed Thomas have pierced our hearts as well. By His resurrection from the dead, Jesus has shattered the very barrier that existed between us and God. By His gift of reconciliation, He has delivered to us His perfect gift of peace. We are at peace with God. With that gift of peace, He also delivers unconditional love, forgiveness, and the promise of eternal salvation.

So for all the times you may have doubted God’s love for you, hear this: For I am sure that neither death nor life, nor angels nor rulers, nor things present nor things to come, nor powers, nor height nor depth, nor anything else in all creation, will be able to separate us from the love of God in Christ Jesus our Lord (Romans 8:38-39). Nothing separates you from God’s love.

For all the times you may have doubted God’s forgiveness for you, hear this: If we confess our sins, he is faithful and just to forgive us our sins and to cleanse us from all unrighteousness (1st John 1:9). God is always faithful. He forgives you.

For all the times you may have doubted God’s salvation for you, hear this: For God so loved the world, that he gave his only Son, that whoever believes in him should not perish but have eternal life. For God did not send His Son into the world to condemn the world, but in order that the world might be saved through him (John 3:16-17). God does not condemn you. He loves you. He sent His Son to save you.

It is all so that you may believe [beyond all doubt] that Jesus is the Christ, the Son of God, and that by believing you may have life in His name (John 20:31). “Alleluia! Christ is Risen” “He is risen indeed! Alleluia!” Amen.