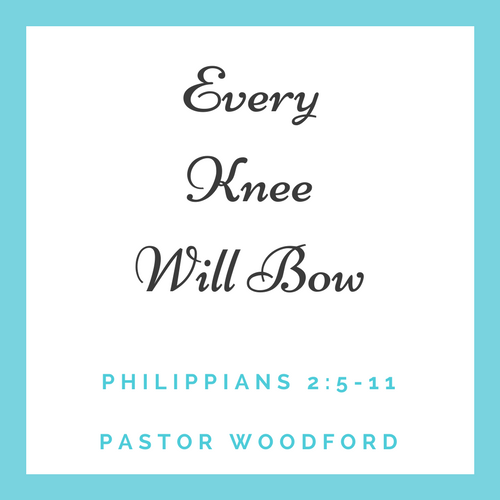 Every Knee Will Bow

9Therefore God has highly exalted him and bestowed on him the name that is above every name, 10so that at the name of Jesus every knee should bow…

Today marks the beginning of Holy week. It is the week we see just how human Jesus was. The sinless Son of God rides into Jerusalem and is hailed as a King on His way to die.

The crowds were gathering, knees were bending, palm branches were waving, people were shouting, “Blessed is He who comes in the name of the Lord,” and children were singing loud “Hosannas;” at the same time the scribes were grumbling, and the Pharisee were plotting.

Jesus Christ is Lord because He came from the stairway of heaven. Born in Bethlehem. Reared in Egypt, brought up in Nazareth, baptized in the Jordan, tempted in the wilderness; He performed miracles by the roadside, on the countryside, and by the seaside. He healed multitudes without medicine and made no charges for his service. He conquered everything that came up against Him. He took your sins and mine, and willingly went to Calvary and died.

As Paul said: Christ Jesus, 6who, though he was in the form of God, did not count equality with God a thing to be grasped, 7but made himself nothing, taking the form of a servant, being born in the likeness of men. 8And being found in human form, he humbled himself by becoming obedient to the point of death, even death on a cross.

8[Jesus] humbled himself by becoming obedient to the point of death, even death on a cross. Jesus died. Make no mistake about it. No matter what skeptics try to say—that He faked it, that it didn’t happen, or that it’s all a lie. Scripture is quite clear. History is clear. Jesus died.

Jesus died! He was crucified dead. We don’t like it when things are dead—unless of course, such things happen to be the garter snake in your lawn or the spider in your basement. Come to think of it, maybe you wouldn’t mind the death of your financial debt, or maybe your enemy, your ex, your boss, or your competition.

Such hate filled daydreams are why Jesus died—for your ugly sins and mine. Yes, Passion Week points us to Jesus’ death. Surely, Mary fell to her knees in sorrow. His disciples surely dropped in disbelief. Knees bowed at His death—but they were bowed in grief.

Because He wasn’t going to be in there long, a borrowed tomb would do just fine. He stayed in the grave just long enough clean it out—to remove its sting and wash away its sorrow. Yes, He knows the darkness of the grave. He knows the coldness it contains. But He dusted out that grave for you. He cleaned it up. Yes, you’ve been baptized into Jesus’ death and resurrection, and therefore He stayed just long enough to make the grave a fine place for you and me to await the Resurrection! Jesus died.

And then, on schedule, as foretold, as prophesied, as ordained by the Heavenly Father, He got up out of that grave with every power of His omnipotence and every detail of His omniscience. Jesus Christ walked out of that tomb as Lord, and every knee will bow at His name.

However, people today think His power is fading and falling. The world seems dark. Unrest is all around. Broken marriages, broken homes, and broken lives cause people to fall to their knees and wonder where is Jesus in all this mess? Perhaps that that’s you.

Others try to wrestle His power away. They deny He’s Lord. In anger and selfishness they aim to destroy His power, be it by unbelief, tyranny, terrorism, governmental decree, or military might.

This is why 9God has highly exalted him and bestowed on him the name that is above every name, 10so that at the name of Jesus every knee should bow, in heaven and on earth and under the earth, 11and every tongue confess Jesus Christ is Lord.

Every knee will bow. Every tongue will confess. As Pastor Lockridge would say, “Jesus Christ is the bird from paradise. He is the gem from the glory land. He is truth’s fairest jewel. He’s time’s choicest season. He’s light’s purest ray. He’s joy’s deepest expression.

His name is like honey to the taste, harmony to the ear, health to the soul, and hope to heart. He’s higher than the highest of heavens, and holier than the holy of holies. In His birth is our significance. In His life is our living. In His cross is our redemption. In His resurrection is our everlasting hope!”

Sadly, some may not believe while they live, and that will mean the sorrow and sadness of Hell when they die. But that’s why we tell them about Jesus. Be assured, every knee will bow.

There is no other name like Jesus. At His name all will bow. The Muslim knee, the Hindu knee, the Buddhist knee, every knee! Your neighbor’s knee, your knee, my knee. In the end every knee will bow and every tongue confess Jesus Christ is Lord. Amen.