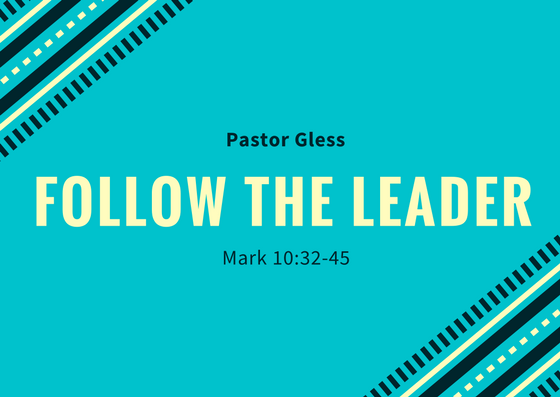 Grace, mercy, and peace be to you from God our Father and our Lord and Savior Jesus Christ. Amen.

And they were on the road, going up to Jerusalem, and Jesus was walking ahead of them. And they were amazed, and those who followed were afraid. And taking the twelve again, he began to tell them what was to happen to him, saying, “See we are going up to Jerusalem, and the Son of Man will be delivered over to the chief priests and the scribes, and they will condemn him to death and deliver him over to the Gentiles. And they will mock him and spit on him, and flog him and kill him. And after three days he will rise” (Mark 10:32-34).

Follow the Leader. The concept of the game is really quite simple. Perhaps you played it as a child. There is one person who serves as the leader. That person stands at the front of the line to lead the others. Then there is a group of people who stand behind the leader. They are the followers. The leader then proceeds forward, and whatever the leader does, the followers are expected to do the same. Again, the concept is really quite simple.

It all started with a request, or perhaps better put, a demand, by James and John while they were following Jesus to Jerusalem. It was a request that made clear that they weren't interested in following. Even though that is the very definition of a disciple. No. They had a different agenda in mind.

And James and John, the sons of Zebedee, came up to him and said to him, “Teacher, we want you to do for us whatever we ask of you.” And he said to them, “What do you want me to do for you?” And they said to him, “Grant us to sit, one at your right hand and one at your left, in your glory.” Jesus said to them, You do not know what you are asking. Are you able to drink the cup that I drink, or to be baptized with the baptism with which I am baptized?” And they said to him, “We are able” (Mark 10:35-39a).

This is a blank check request, with a dose of arrogance on the side. James and John wanted Jesus to do whatever they wanted for them. No limits. Just sign at the bottom and we will fill in the amount. And fill in the amount they did, as they asked of Jesus to sit at his right and left in his glory.

Greatness and glory. Our society is saturated with the pursuit of it. We crave it. We love it. We love the feeling it gives us to think we are on the top of the world. We love the so-called power it provides when we can think we are in some way, anyway, better than someone else. We love the attention it draws from others, the limelight, even if it is just our fifteen minutes of fame. In fact, we love it so much we are even willing to bask in the light of someone else’s greatness and glory. We flock to be in the presence of celebrities, star athletes, and musicians. We think, if we can’t be famous, maybe we can rub shoulders with someone who is and some of it will rub off on us, even if just for a moment.

Through it all, what is the aim? What is the goal of this seeking of greatness and glory? It is to breed jealousy in others. Look what I did that you didn’t do. Look who I was with that you weren’t with. Look at me, don’t you just wish you were more like me? Such jealousy then only breeds division.

That’s what happened between the disciples in today’s text. And when the ten heard it, they began to be indignant at James and John (Mark 10:41). And why wouldn’t they be indignant? Every one of them wished that they had come up with the idea first. What James and John demanded of Jesus is the same demand they all had. Sure they were willing to follow Jesus, but there was an underlying motive at work. They all hoped their following would lead to greater glory in the long run. It was a ‘what’s in it for me’ approach. And this wasn’t the first time this topic had arisen among the disciples.

You will recall only a chapter ago that such a pursuit of glory consumed their minds: And they came to Capernaum. And when he was in the house he asked them, “What were you discussing on the way?” But they kept silent, for on the way they had argued with one another about who was the greatest (Mark 9:33-34).

How much time do we waste arguing over or pursuing being the greatest, the greatest athlete, the greatest employee, the greatest friend, the greatest sibling, child, parent…the list goes on. All in an effort to try and validate our so-called superiority over another…when all of us stand before God as equal. We are all sinners. Sinners in need of a Savior.

Thanks be to God we have a Savior who displays such patience toward us as He did with His disciples. He doesn’t write us off or condemn us when we lose our place in line and think we should be the leaders. No, He takes us where we are at and shows us the error of our ways. He gently guides us to repent of our sinfulness, graciously forgives us, and then He redirects us back to where we are to be and remain. He calls us to be His disciples who follow Him to the cross and the empty tomb.

The very same place He told His disciples to follow Him toward. See we are going up to Jerusalem and the Son of Man will be delivered over to the chief priests and the scribes, and they will condemn him to death and deliver him over to the Gentiles. And they will mock him and spit on him, and flog him and kill him. And after three days he will rise” (Mark 10:33-34).

We hear that, and it’s no wonder that James and John didn't want to be followers. Their leader was going right into the foothold of the enemy. Mocked, spit upon, flogged, killed? Why would they want to follow Him there? Certainly a fair question.

In fact, it is a question that all of us needs to consider in the times we are now living in. Being a Christian is no life of greatness and glory as the world defines it. Mockery and the threat of death are more the reality. Take the recent episode of ABC’s The View where one of its anchors mocked Vice President Pence’s Christian faith by comparing it to a mental illness. A statement she made and received no consequence from the company she works for whatsoever. So much for tolerance, right? Or how about the cake maker in Colorado who finds himself before the Supreme Court for refusing to make a cake for a homosexual couple because to do so was against his religious views as a Christian. And all the while, he and his family face constant death threats. So much for religious liberty, right?

Brothers and sisters in Christ, let us put our pursuits of worldly greatness and glory aside, for that will not be our lot in life if we are to remain faithful. Let us humble ourselves as servants and patiently endure the suffering that comes with it. As the Apostle Paul told us: We rejoice in our sufferings, knowing that suffering produces endurance, and endurance produces character, and character produces hope, and hope does not put us to shame (Romans 5:3-5a).

It is just like Jesus told His disciples…they would be baptized as he was and they would drink the cup that he would drink. They would suffer and die as He did. But through it all, sure and certain hope would remain. There would be a light at the end of the tunnel.
That light is the light of the tomb opening on Easter morning. Our text told us: after three days he will rise. And He did. So it will be for His disciples who followed Him. So it will be for you and me.

Jesus gave up His heavenly greatness and glory to enter into this world of sin and shame. He put aside popularity to dine with tax collectors, prostitutes, and sinners. He didn’t come to seek the attention of the paparazzi. He came to heal the sick and forgive sinners. He didn’t expect people to wait on him hand and foot. Rather, on the night He was betrayed by one of His own followers, He wrapped a towel around his waist to wash the dirt and dung off of his disciples’ feet, and then He gave them his own body and blood so that they would be strengthened for their own life of service long into the future. He didn’t demand that we pay the price of our life for our sins. He did it for us. He was mocked. He was spit upon. He was flogged. He was killed…in our place. Because that’s what He came to do. That was His mission from the very start: to serve us in order to save us.

And He keeps serving us so that we may continue to follow Him. In fact, He does so yet again today through His Word and Sacraments. This is where we receive all the nourishment we need to endure as His disciples…so that we too may live a life of service toward God and our neighbors. No, it isn’t going to be easy. There will be trials and tribulations galore, but take heart, our leader has overcome the world. We can trust Him to lead and guide us through it all, come what may. He will see us through the cross and the empty tomb. So, in full assurance of faith, let us follow our Leader confident that where he leads there will be greater glory than we could ever imagine. In Jesus’ name. Amen.