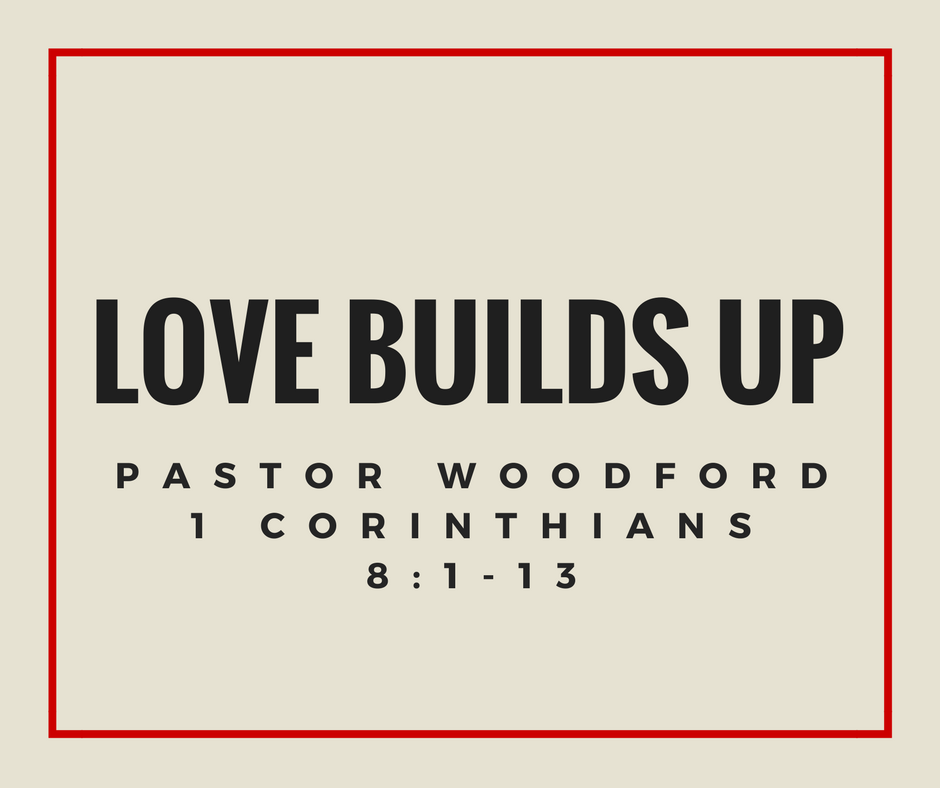 1Now concerning food offered to idols: we know that “all of us possess knowledge.” This “knowledge” puffs up, but love builds up. 2If anyone imagines that he knows something, he does not yet know as he ought to know.

Who is the smartest person you know? How do you know that they’re smart? Do they constantly tell you how knowledgeable they are, or do they simply serve others with their knowledge and let it speak for itself? In other words, do they use their knowledge to build others up or simply to puff themselves up? That’s what the Apostle Paul is getting at.

There are plenty of people in this world who are happy to tell you how smart they are. Some tell you to your face, others tweet about it, and others write a book about it.

Apparently, this was a bit of a problem for the Christians at Corinth. Some were acting with Christian knowledge but not with Christian love. Corinth was a multicultural congregation with people of varying degrees of faith. In fact, some were only recent converts to Christianity. Only a month before they may have been worshipping false idols and eating meat in tribute to those false gods, but now they were learning the Christian faith and the way of life that went with it, which included putting a stop to what they learned were ungodly behaviors or practices.

The specific issue Paul is talking about in this reading was how those “smart” or “knowledgeable” Christians were treating fellow Christians, especially those who were not as well versed in the freedoms of the Christian faith, particularly about eating food offered to idols.

To put this into contemporary terms, consider Hmong Village market just 45 miles from here in St. Paul. I’ve been there a few different times and it’s a unique market with all kinds of Hmong shops with authentic clothes, trinkets, and food from the south Asian countries (i.e. Vietnam and Laos).  This serves near 150,000 Hmong people now living in the Twin Cities.

In my visits I often saw in some of those food shops a statue of Buddha with incense burning in front of it in a manner that is overlooking all the food being sold. You and I know Buddha is a false idol and false religion. Therefore, I in good conscience had no problem buying the food or various curiously smelling fruits from the shop.

However, other Christians new to the faith may take offense at me buying food from that shop. Especially if it is a new Hmong Christian who just gave up all her Buddhist practices to become Christian. So would I be willing to forgo my freedom to buy and eat whatever I wanted from that shop for the sake of that fellow Christian? Do I love them enough to forgo a freedom I know I have so that they will not be offended.

That is what Paul is emphasizing when he says, knowledge puffs up, but love builds up. He goes on to explain: 5For although there may be so-called gods in heaven or on earth—as indeed there are many “gods” and many “lords”— 6yet for us there is one God, the Father, from whom are all things and for whom we exist, and one Lord, Jesus Christ, through whom are all things and through whom we exist.

7However, not all possess this knowledge. But some, through former association with idols, eat food as really offered to an idol, and their conscience, being weak, is defiled. 8Food will not commend us to God. We are no worse off if we do not eat, and no better off if we do. 9But take care that this right of yours does not somehow become a stumbling block to the weak.

In other words, just because you know you have the Christian freedom to do something, doesn’t automatically mean you should, nor does that “knowledge” make you better than someone else. Rather can you love others in such a way that builds them up?

The truth of the matter is the Lord wants His Church to be built up as a community, and that can only happen when its members display unselfish love for one another—which includes all those gathered with us today, along with those in our community, in our homes, and even in our work places. Love builds up. Love encourages. Love rejoices in others.

However, the arrogant person (noted in verse 2) who is satisfied in his or her possession of a certain level of Christian knowledge has not yet really comprehended the gift of the Christian faith. They have reduced the Christian faith to a mere set of facts or statements that they are happy to acknowledge, but do not know what it is to actually live the Christian faith in a way that actually loves others and looks to build others up.

In fact, Paul is quite blunt about those who claim such Christian knowledge. You and I do well to pay attention to it. Later in this same letter to the Corinthians (chapter 13:2) he says: “If I understand all mysteries and all knowledge, and if I have all faith, so as to remove mountains, but have not love, I am nothing.”

This world is filled with plenty of people who tear people down for their own delight: Bosses who rip apart employees but never compliment them. Parents who are happy to chastise their kids, but never give them encouragement or affection. Siblings who love to criticize their brother or sister, but are rarely patient with each other.  Classmates who harass others and call them names or relentlessly tease them; professors who intimidate and belittle students. Tearing people down happens all too often. Perhaps you know what that is like. Perhaps you do that.

To be sure, those 13 children who we imprisoned and abused in their own California home by depraved parents David and Louise Turpin, where some of them even chained to their beds, know what it is to be relentlessly torn down. The over 200 girls who were sexually assaulted by USA Olympic doctor, Larry Nassar, know that that is like. And the unborn children that never see the light of day because abortion continues to be a right in this land not only know what it is to be torn down, but literally torn apart.

Love that “builds up” seeks to protect life and celebrate life not just know what is considered life. We can have all the knowledge and all the smarts in the world, but without love, it amounts to nothing. I can be top dog at work, get all A’s on my report card, be the smartest coach, the smartest Christian, the smartest pastor, or even the smartest President of the United States, but if I have not love, I am nothing says the Apostles Paul.

A man by the name of Rod Rosenbladt tells the story about one night when he was 16 years old. He grew up in a Christian family. It was the 1950’s and was one of the fortunate boys who had a car of his own. One Friday night he took his car out and picked up some buddies to have a teenage night on the town.

However, as Rod tells it he had been drinking throughout the night. In fact, he and his friends were all drunk. As one might expect, he ends up crashing his car. Fortunately, no one was hurt. But he knew he would have to tell his dad. The car was ruined.

After the accident, Rod called his dad, and the first thing his dad asked him was, “Are you all right?” Rod assured him that he was fine. Then he confessed to his father that he was drunk. Rod was naturally terrified about how his father might respond.

Later that night, after Rod had made it home, he wept and wept in his father’s study. He knew he was wrong. He knew what he had done. He was embarrassed, ashamed, and guilty.

Rod says God’s love became real to him in that moment of forgiveness and mercy. It washed over him and took a hold of him. As a result, Rod would go on to study to be a pastor. In fact, he went on to gain all kinds of Christian knowledge earning a Ph.D., yet always living in that love, where he would spend over 30 years of his life as a professor teaching and preaching about that love and grace to students at Concordia University in Irvine, California.

Of course, at the core of his teaching is not how much he knows, not how many degrees he has, nor how smart he is, but how much Jesus Christ loves his students. Love builds up!

You see, the love that Rod’s father showed him didn’t turn Rod into a drunk—it made him love both God and his father all the more.

But what’s interesting is that Rod says every time he tells this story in public there are always people in the audience who get angry. They say, “Your dad let you get away with that? He didn’t punish you at all? He missed a great opportunity to teach you responsibility!”

Rod always chuckles when he hears that response and says, “Do you think I didn’t know what I had done? Do you think it wasn’t the most painful moment of my whole life up to that point? I was ashamed; I was scared. And my father spoke grace and love to me in a moment when I knew I deserved wrath … and because of that I came alive.”

That is the nature of love and grace. Love builds up. As Christians who know God’s law, we know that we deserve punishment, but when we receive mercy instead of wrath, we discover love and the life that there is in it.

Our offenses are infinitely greater than a sixteen-year-old getting drunk and wrecking his car, yet God boasts not about how smart He is or how much He knows, but about pouring out His unconditional love on His undeserving children. Yes, the love of God is such that, “While we were yet sinners, Christ died for us” (Rom. 5:8).

You see, the only way we could ever possibly love our neighbor as ourselves is because we have been baptismally drenched in the irreversible, unconditional, and unending love of Jesus Christ. He loves you when you don’t feel lovely. He loves you when no one else loves you. Others may abandon you, hurt you, divorce you, and ignore you, but Jesus will love you. Always. No matter what.

And when you are loved like that, it changes you and transforms you. It builds you up. It gives you life. It let you share that love with others. Love builds up. In Jesus’ name, Amen.