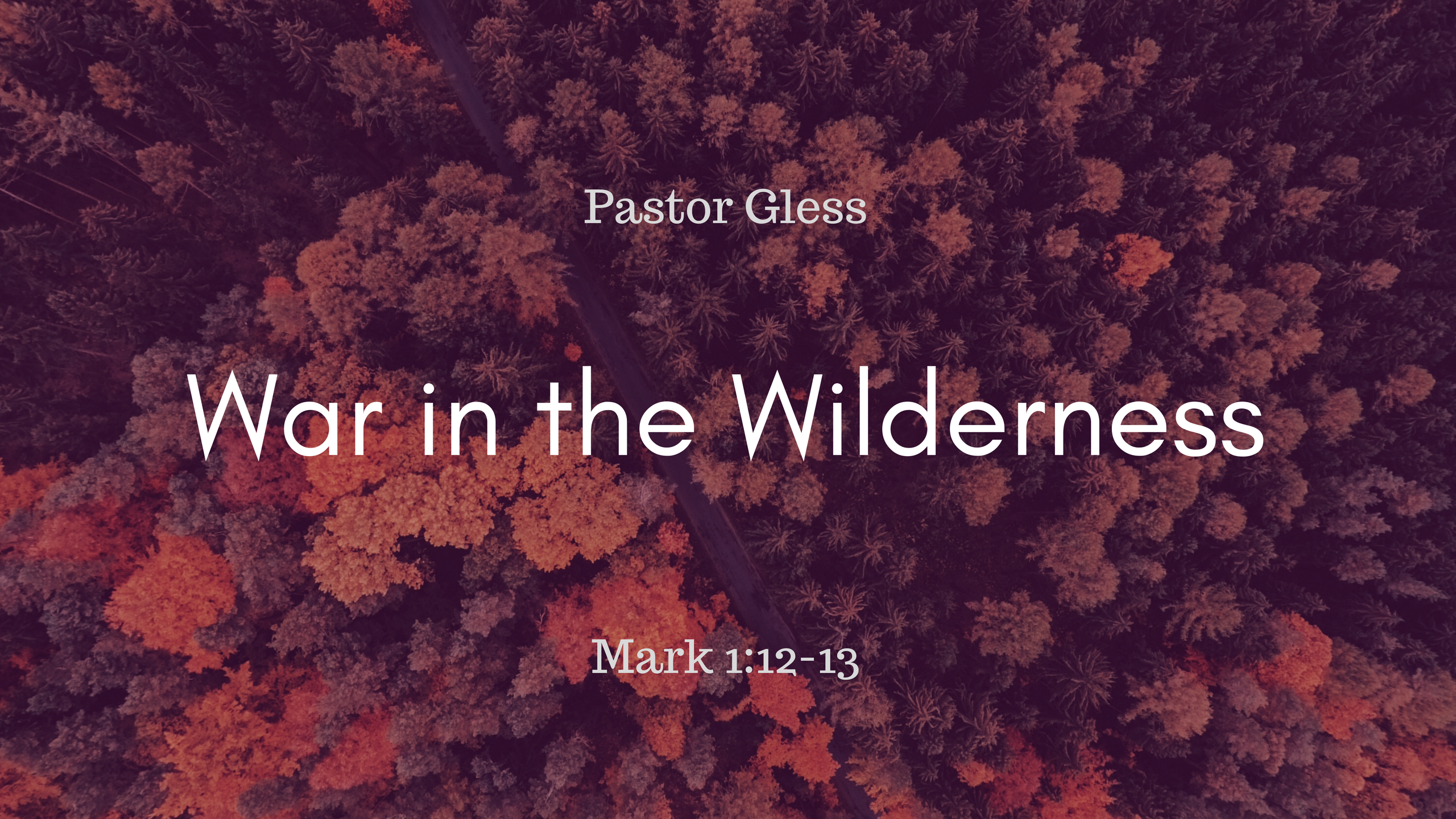 Throughout the history of boxing, there have been some historic bouts. There was the Rumble in the Jungle, where in the Congo, Muhammad Ali knocked out George Foreman. There was The Showdown, when Sugar Ray Leonard defeated Tommy Hearns. There was the Thrilla in Manila, the third meeting between Ali and Joe Frazier, where Ali took down his arch rival. And who could forget the Ruckus in Russia, where the much shorter Rocky Balboa knocked out the giant, better known as Ivan Drago. Granted, that last Hollywood version didn’t make it into the history books. But it should have…

Well, have you ever heard of the War in the Wilderness? It happened some two thousand years ago. And any of those bouts previously mentioned pale in comparison to the duel that went down between these two opponents. Jesus vs. Satan.

Listen again: The Spirit immediately drove Jesus out into the wilderness. And he was in the wilderness forty days, being tempted by Satan. And he was with the wild animals, and the angels were ministering to him (Mark 1:12-13).

This was no mere fifteen round bout. This fight went on for forty days. Forty days of standing toe to toe with each other grinding it out before a crowd of wild beasts and angels.

Here only a few weeks ago we were marking the baptism of Jesus where the heavens were torn open, the Spirit descended upon Him in the form of a dove, and the Father spoke, “You are my beloved Son, with You I am well pleased.”

With not a bite to eat for forty days, Satan went in for a barrage of blows right at Jesus’ belly. “If you are the Son of God, command these stones to become loaves of bread,” Satan taunted. Just hearing the word ‘bread’ after all those days must have really caused a rumble in Jesus’ belly. But no matter how many jabs Satan got in with this temptation, Jesus still forced him back. “Man shall not live by bread alone, but by every word that comes from the mouth of God.” And with that, the first temptation was done.

But the fight was far from over. Forcing Jesus into a corner, the combat continued as Satan took him to the top of the temple and said, “If you are the Son of God, throw yourself down, for it is written, ‘He will command his angels concerning you,’ and ‘On their hands they will bear you up lest you strike your foot against a stone.’” At this point, Satan must have really thought that he had Jesus where he wanted him, but Jesus didn’t hesitate to strike back. Not one bit. Jesus counter punched in saying, “Again it is written, ‘You shall not put the Lord your God to the test.’” And so went temptation two.

But when the bell rang for the next temptation, Satan went in for the knockout punch, showing Jesus all the kingdoms of the world. “All these I will give you, if you will fall down and worship me.” But Jesus quickly ducked and returned Satan’s knockout punch with one of His own, “Be gone, Satan! For it is written, “You shall worship the Lord your God and him only shall you serve.” And when the devil had ended every temptation, he departed until an opportune time. Until a rematch could take place.

As we stare into the ring, we get a very good picture of what our life is like. Like Jesus, we are tempted by Satan. The old evil foe is like a roaring lion who is seeking to devour us. From the very moment that we are baptized, Satan confronts us head on in the wilderness of our lives.

Yet, how often do we not take Satan’s temptations to sin all that seriously? How many times have we justified to ourselves in some way or another that if we fall to temptation, it won’t be that bad? As if the wages of sin being death is not that big of a deal. Perhaps, in some ways, we may have even convinced ourselves that Satan and hell are not even real. That in the end, everything will be alright, and we will all go to heaven.

May this text serve as a wakeup call for all of us that Satan is real, his temptations are real, and sin, death, and hell are real. His attack on us and the Christian Church is a big deal and is not to be taken lightly in the least. If he would go head to head with the Son of God, then he won’t bat an eye going after us. He delights in trying to take us down. What’s more, he’s really good at it. He has had generation after generation of experience.

It all started in the Garden of Eden. Dangling that piece of fruit before the eyes of Eve, he asked, “Did God actually say that you couldn’t eat of the fruit of this tree?” And when Eve confirmed that this was true, the great deceiver got down and dirtier. “You will not surely die. For God knows that when you eat of it your eyes will be opened, and you will be like God, knowing good and evil.” And with that deception, Satan has not ceased to try and sever our relationship with God to take us down into the darkness of death.

So where does that leave us? We are no match for the devil. We just sang that very truth in the hymn we just sang, “The old satanic foe has sworn to work us woe. With craft and dreadful might he arms himself to fight. On earth he has no equal.”

Well yes, it may be true that there is no one on earth who can equal the strength and stamina of Satan, but there is One who came from heaven to earth, who didn’t hesitate to enter the wilderness of our lives, and Satan was no match for Him whatsoever. “You ask who this may be, the Lord of hosts is He, Christ Jesus, mighty Lord!”

You see, the war in the wilderness was just a foretaste of the feast to come. Jesus was just getting started. There was a Clash on Calvary that was yet to come. And this time, it only took three words to do the job. “It is finished.” And so it was. Sin and death done for. The devil defeated. Down for the count.

And Jesus didn’t go without letting Satan know who the heavyweight champion was either. Jesus proclaimed his victory in hell, and He did once again when He burst forth from the grave alive and well. From that point on, Satan has known that the war is over.

And it still is. Yet while we live in this sin-filled world, the war may be over, but the battles wage on. Though Satan has ultimately lost, he still prowls around seeking to devour us as we await the return of our Champion Savior. Until then, we must be on our guard, arming ourselves with the Word of God that is sharper than any two-edged sword and constantly calling out to the only One who can deliver us. The One who taught us to pray:

“Lead us not into temptation. Deliver us from evil.” We are taught to pray this way because we will be right back in the ring with Satan as soon as we walk out those doors. But no matter the temptation he throws at us, remember who’s in our corner.

Above all else, may this text serve to comfort us in the truth that Jesus reigns victorious, and He has joined Himself to you. He stared Satan down in the War in the Wilderness and defeated him once and for all in the Clash on Calvary. He is your help, and he is my help, whenever we are tempted. Whenever we are misled to believe that temptations to sin are not that big of a deal.

Scripture tells us “Because he himself has suffered when tempted, he is able to help those who are being tempted” (Hebrews 2:18).

So you see, we are not alone when we are being tempted to sin. We aren’t left to be backed into the corner of the ring and face a constant barrage of blows. “We have an advocate with the Father, Jesus Christ, the righteous One” (1st John 2:1). He is your Savior and mine, and He has willingly jumped right into the ring to take those blows in our stead. He graciously comes to our aid whenever we call upon His name. He is our refuge and strength, and He doesn’t leave us hanging on the ropes.

Again Scripture says, “For we do not have a high priest who is unable to sympathize with our weaknesses, but One who has been tempted as we are, yet without sin” (Hebrews 4:15).

What a comfort as we face our own wars in the wilderness of life. Where we fall to temptation, our Savior Jesus never does, and never did. And as the great high priest, He willingly laid down His perfect life in order to save imperfect people like you and like me. To save us from sin, death, and the devil.

“Thanks be to God who gives us the victory through our Lord Jesus Christ” (1st Corinthians 15:57). We need not fear the devil and all his works and all his ways. The head of the serpent has been crushed. Jesus has won the bout by knockout once and for all! It is finished! “He holds the field victorious.” In Jesus’ name. Amen.