Zealously Jealous For You - Pastor Gless 3/4/18 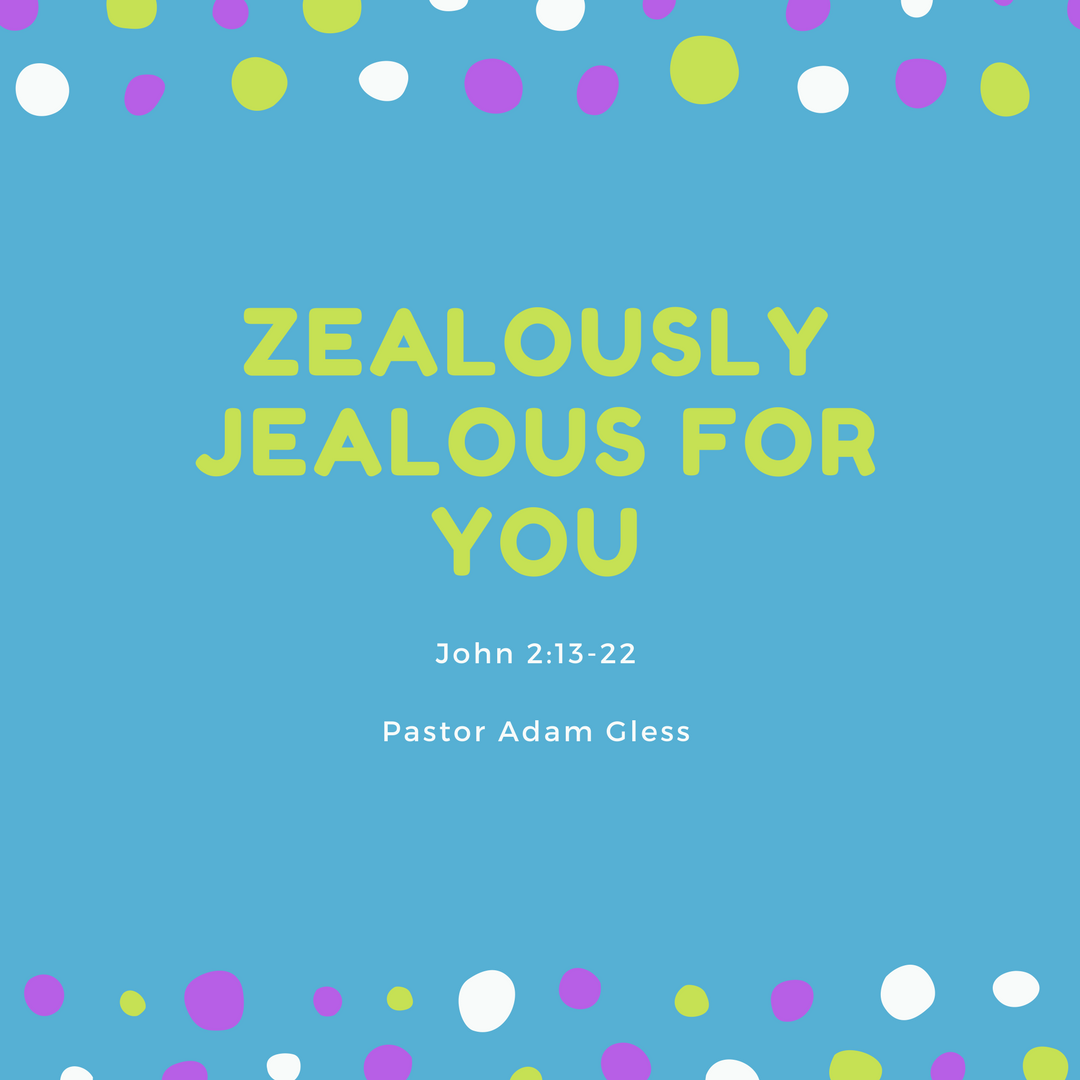 The Passover of the Jews was at hand, and Jesus went up to Jerusalem. In the temple he found those who were selling oxen and sheep and pigeons, and the money-changers sitting there. And making a whip of cords, he drove them all out of the temple, with the sheep and oxen. And he poured out the coins of the money-changers and overturned their tables. And he told those who sold the pigeons, “Take these things away; do not make my Father's house a house of trade.” His disciples remembered that it was written, “Zeal for your house will consume me” (John 2:13-17).

What a mess! Oxen and sheep running everywhere. Tables overturned. Coins rolling across the floor and scattered this way and that. Pigeons flying all over. People racing for the exits. It was a scene of utter chaos. And there at the center of it all was Jesus, face flushed, breathing heavily, with a whip in His hand. A whip He had fashioned on His own to drive them all out. And drive them all out of the temple is exactly what He did.

We have come to expect Jesus to be kind, caring, and compassionate, and He is all those things. But He is also not immune to other emotions either. Some may call what happened in the temple a fit of rage or a temper tantrum, but the more appropriate term is that Jesus was filled with zeal. Luther defines zeal as an angry love or a jealous love, for Jesus’ anger does not arise from hatred; it springs from love toward God.

It was zealous love toward God that motivated Jesus to do what He did in the temple that day. He looked around and He saw that His Father’s house had been reduced from a place of worship to a business, a house of trade.

You see, in an effort to make things more convenient for the Jews travelling to the temple in Jerusalem for the Passover, animals for sacrifice were sold there. This way people didn’t have to travel from far off locations with an animal in tow. They could just purchase the appropriate animal for sacrifice on site. Then, when it came to the temple tax that was expected, money changers were readily accessible to exchange currency for anyone who needed it.

It appeared to be a kind and caring service they were offering to those who were travelling to the temple at the Passover, but it was really anything but. Animals were sold at exorbitant prices. Exchange rates for the currency were extremely excessive. So as it was, the work of the temple came more down to profit margins than worship. And beyond that, it was all done in the Court of the Gentiles, the only place a Gentile was allowed to worship and pray.

What are you zealous about? What are you passionate about? What causes you to get worked up inside? For some, it’s sports. Be it college, professional, or their kids’ peewee leagues, they can’t help but shout and scream as if somehow it could make a difference. For others, it’s politics. They love talking about it incessantly, gloating when their side is winning, and griping when they are on the losing end. What are you zealous about?

Our text makes very clear what God is zealous about. He is zealous for His house. But more than that. He is also zealously jealous for His people. He can’t stand seeing His Word being twisted and abused for selfish exploits. Above all else, He expects that we obey His Word because He knows what is best for us.

That’s why in the Old Testament Reading, He graciously gives us His Ten Commandments. And while doing so, he says this: For I the Lord your God am a ‘jealous’ God, visiting the iniquity of the fathers on the children to the third and the fourth generation of those who hate me, but showing steadfast love to thousands of those who love me and keep my commandments (Exodus 20:5-6).

He gives us His commandments because He is Zealously Jealous for Us. He doesn’t want us to turn away from Him. He knows that will only lead us to death and condemnation. So, in a zealous, jealous love for us, He tells us exactly how to follow Him. He doesn’t leave any doubt out there. It is all laid out for us in these Ten Commands of God.

So what would we think God would say about us and our handling of His Word and His commandments? How are we doing? What’s going well? What could be done better?

Are we putting God first in all that we do, or is He farther down the totem pole in our priorities?

Are we respecting His name, or do we take it in vain, curse, and swear?

Are we honoring the Lord’s day as holy, or do we have better things to do?

Are we respecting our parents and other authorities, or do we think we get to be the ones who call the shots in our lives?

Are we protecting the lives of others, or are we filled with the desire to lash out in anger and hatred?

Are we cherishing our spouse, or our wandering eyes looking elsewhere?

Are we protecting the possessions of others, or are we looking for avenues to take advantage of others for personal gain?

Are we honest in our interactions with others, or do we lie to get our own way?

Are we content with what we have been given, or do we have a jealous desire to have what belongs to others?

It is as Jesus says in the Gospel of Mark, For from within, out of the heart of man, come evil thoughts, sexual immorality, theft, murder, adultery, coveting, wickedness, deceit, sensuality, envy, slander, pride, foolishness. All these evil things come from within, and they defile a person” (Mark 7:21-23).

So you see, it’s not just the temple that was in need of a cleansing. So do we. Our bodies are also temples; temples of the Holy Spirit. And yet, we have abused and defiled the temples we have been given by God by neglecting His Commandments. And such abuse and defilement comes with a price. Sin is like poison, where even in the smallest of amounts, it still kills. So, if our bodies are not cleansed of the poison of sin, we are doomed to die…eternally.

That is exactly why God sent His Son Jesus. You see, your God is zealously jealous for you. He loves you. He doesn’t want you to die. He is so passionate in His love for you that He would stop at nothing to save you. Even if it meant sacrificing His own Son, His own beloved child. Which is exactly what He did. And He did it all for you. He willingly paid the price.

He takes our sin, and it is buried in the tomb with His body. And it is no more. Gone forever. You are forgiven. But He doesn’t stop there. There was a resurrection yet to come. Knowing your body was yet doomed to die, His body was raised from the dead. It’s what this whole season of Lent builds toward. The Resurrection of the Body and the Life Everlasting. It’s exactly what He predicted would happen in our text for today: Jesus answered them, “Destroy this temple, and in three days I will raise it up” (John 2:19).

That is exactly what He did…for you. In the most beautiful exchange, He joined His life to yours and your death to Him so that you would not die. He wants nothing more than for you to remain with Him. And not just for a moment, but for an eternity. That’s why He makes sure that nothing separates you from Him and His love for you. He dies for you. He rises for you. It’s all for you.

And He assures you of His promise to you yet again as He comes to you today. In, with, and under the bread and the wine, His resurrected body and blood are given to you. All to assure you that even though your body will one day be placed in the grave, that will not be the end of the story. Like His body was raised, so will yours be. For He has cleansed your body with His holy and precious blood, with the price of His life. You have been redeemed. You have been bought back from death and into life, by He who is the Resurrection and the Life. That’s how zealously jealous He is for YOU. In Jesus’ name. Amen.